Research on sports way of life 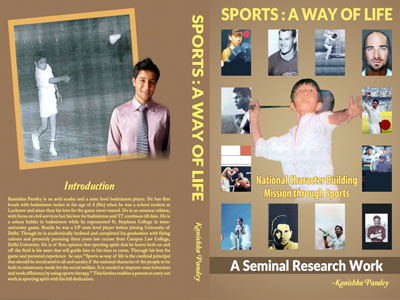 Sports: A Way of Life, is a seminal research work by Dr. Kanishka Pandey who is a unique blend of academics and a sports person. He is a former Badminton player from Uttar Pradesh and he completed his Bachelor of Arts (BA) from St. Stephens College, Delhi University. He also completed his LLB  from Campus Law Centre, Delhi University.  Currently heading India's First Sports Research Centre, IMT Ghaziabad.

This research work is the first of its kind academic research work on sports, which lays emphasis on national character building through sports and seriously challenges the adage that sports spoil the human being.

The research has found, if children were to participate in sports from an early age, it can ingrain more than 16 sports values in human beings and these help fight depression and imbue competitive instinct. It Inculcate value of honesty, integrity, confidences, ability to fight depression, learning respect, discipline and importance of hard work and developing a character which helps individual in the long run. Besides, these sports values build solid individual character and arm him / her to fight corruption that has plagued our society. It also helps him to face difficult times with grace.

He completed his research in three years encompassing various aspects of sports and how it can solve various problems of our society, especially amongst the budding kids and how it can create a sporting talent pool. During this research various targeted groups were surveyed such as labourers and management of various industries, students of various coaching institutes, players of various training camps. Data was also collected from various police stations, depression patients were also surveyed and old players were also surveyed besides, parents and teachers also included in this survey before arriving at a conclusion .

Sports: A Way of Life (Research work completed in 1100 days of rigorous work)

· Surveyed more than 1000 students and people from various walks of life.
· Depression patients, moral turpitude prevailing in our society.
· The corporate war impeding progress of the nation.
· Red tapism in bureaucracy.
· Industrial disputes.
· Labour management dispute.
· Reasons for increasing cases of suicide and various other crimes.
· Attain a sporting spirit to take win and loss in same stride.

. Collected primary data by rummaging through scores of sports person's profile.
· Conducting survey of industrial houses for understanding pattern on dispute in the context of prevailing working culture  in the corporate world.
· Interviewing depression patients in various hospitals and centers.
. Studying the suicide cases from reputed hospitals of this country along with interviews from the practicing doctors in hospital.
· Understanding the reason for crime in general by case study.
· Interviewing various coaching students.
· Worked closely with various police stations and officers on cases.
· In depth studies of biographies of renowned sports persons about their high and low in life.
· Analyzing the working strategy and thinking of various terror groups operating in and around India and the world.

· Engagement in sports activities offer a viable solution to almost all ills that our society is plagued with.
· Medical fraternity should use sports as therapy while dealing with depression patients.
· Parents must encourage their wards to play sports from early childhood.
· Regular competition and motivation can help nip the suicide tendency and nip it at the bud by developing an instinct of equanimity in every condition besides learning the sport.
· Inculcate value of honesty, integrity, confidences, ability to fight depression, learning respect, discipline and importance of hard work and developing a character which helps individual in the long run.