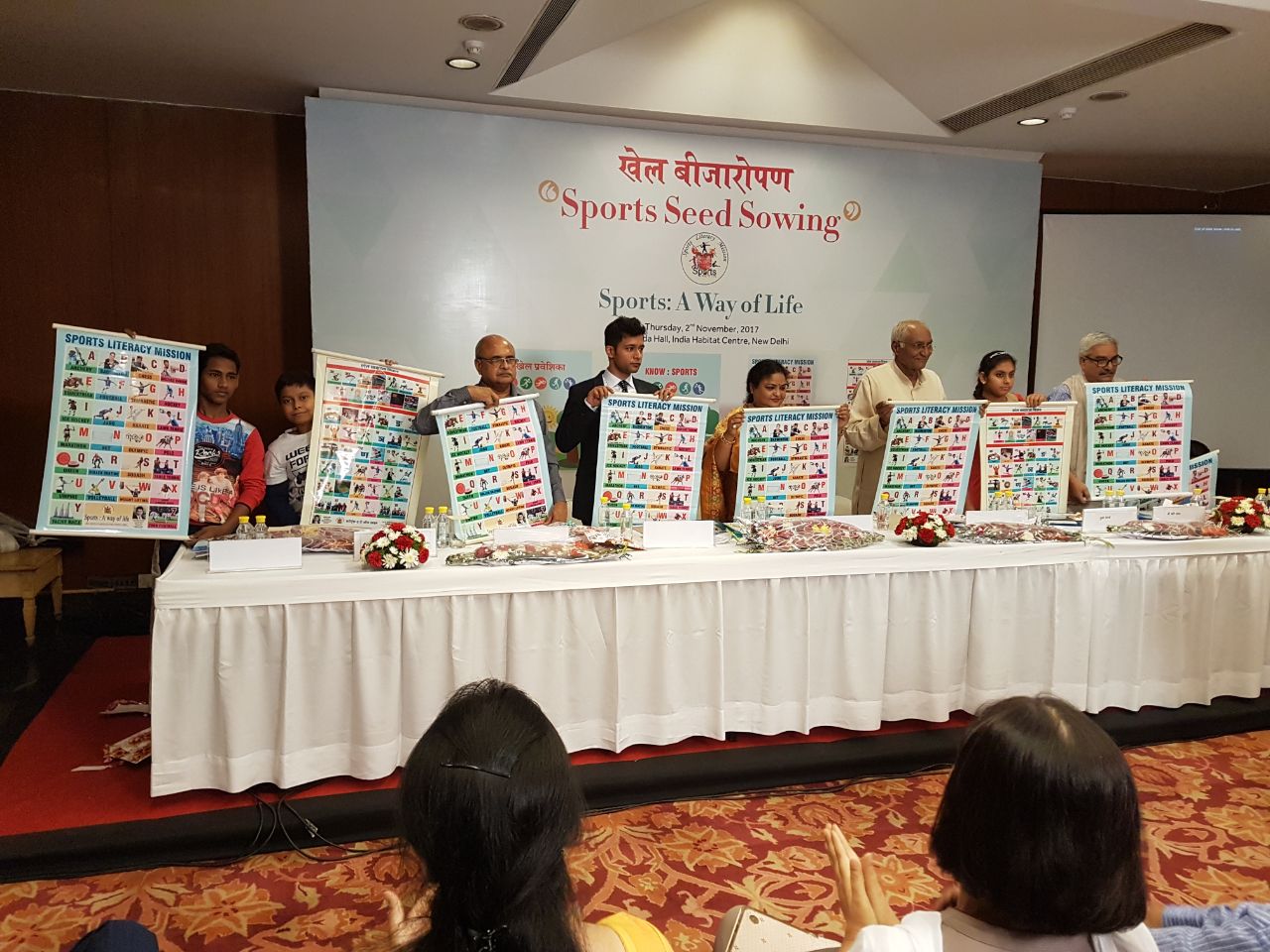 Children look with curiosity to sports calendar and each one of them jostling to find one calendar for his home. Seeing picture of sports gadgets in the calendar endears them and they now pledged to play.


Sports: A Way of Life, an organisation which runs sports literacy in the country has now taken up innovative and new initiative and created a new alphabets both in Hindi (Khel Praveshika) and English (Know Sports) for the toddlers. In next step of this mission, these basic books for kids were launched today at India Habitat centre in New Delhi.

Unlike other book launch programme, where celebrity are called in, this Khel Praweshika was launched by children from orphanage and slum which was unique in every way.

Speaking on this occasion, young researcher and President of Sports: A Way of Life, Mr. Kanishka Pandey said, “In first step of the Sports Literacy Mission, we had tried to sensitize parents from both villages and town areas as I strongly believe that parents are the first teacher of every child. I had sent appeal to almost 40 thousand parents, whose children are studying in government schools.”

The appeal has encouraging effect but it is yet a million dollar question as to how to motivate parents and children to participate in games and athletics in a big way. So we have now started a movement to let the schools set in a norm where sports are given weightage during even admission as there has been a vast population which are bereft of sports knowledge and several of them even don’t know the name of various sports. Khel Praveshika (in Hindi) and Know sports in English, has been an attempt to find solution to this problem. As we all know our academic foundation is laid down on our knowledge of the alphabets of Hindi and English and our entire success depend on it. likewise if the foundation of sports have to be laid down then there has been an earnest need to have a basic book where children know various sports at their early age. We rummaged through the various sources to find out the name of various sports as well as the equipment which starts will such alphabets of Hindi and English and these were later compiled in these basic books. When we can learn K for kabooter and kh for kharbhuja and A for apple and b for banana than why cannot we learn Kh for khokho and a for athlete b for basket ball?

Ghaziabad district is our pilot district for this project of spreading sports literacy among all segments of society and we have set an ambitious goal to make Ghaziabad first 100 percent sports literate city in the country. We intend to let all schools of Ghaziabad have access to these basic books for students till class fifth besides, they get to display these calendars in the class rooms as we are governed by philosophy that ‘Sports does not discriminate. To spread this message across the society we have picked up students from various groups i.e. from convent school to government school to orphanage to those living in slums and today these small children are our guests. Through this we want sports to be taken up by every segment of society. Besides several people from art, literary, sporting administrative and journalistic world were invited so that they play their part in evolving a sports culture in this country. This will help not only in increasing our future medal tally in global sports but also help in developing human resource who are driven by sports values and ethics.

Speaking on this occasion chairman of Sahitya Academy Dr Vishwanath Prasad Tiwari said, “The effort made by Kanishka to promote sports culture in India is commendable on every account and this effort will be game changer for sports in this country.”

The former chairman of MCI Dr. R.K. Srivastava said, “The effort to create interest in games from early childhood will even pave a new way for doctors and psychiatrist to approach the patients in a different way than they generally have been doing so far.”

Minister of state for Basic Education with independent charges in Uttar Pradesh government, Mrs. Anupama Jaiswal, praised Kaniskha for his effort as she said, “His effort will lay foundation for future India.” She also said that this Praveshika and Know Sports will be taken to every school in Uttar Pradesh so that it reaches each student in Uttar Pradesh. Khel Ratna Devendra Jhajahria said that these booklets should made part of the school curriculum in rural areas.  Others present on the occasion included famous theatre artist Bansi Kaul, and several people from the field of sports administration journalism, young parents and politician. Today’s special guest Vinayak Mishra, Chetan, Virat and Pranvi seemed excited all through the event. 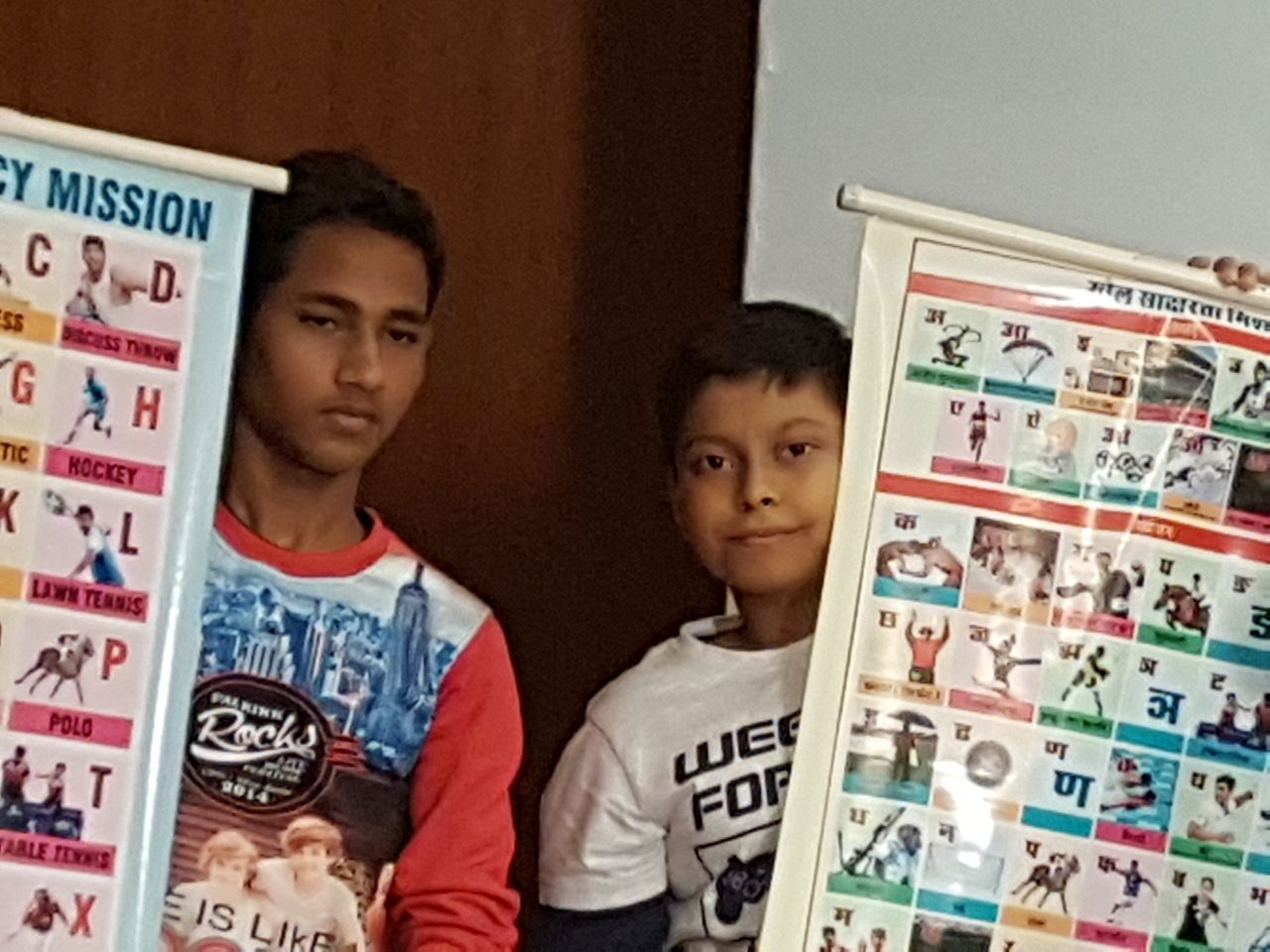 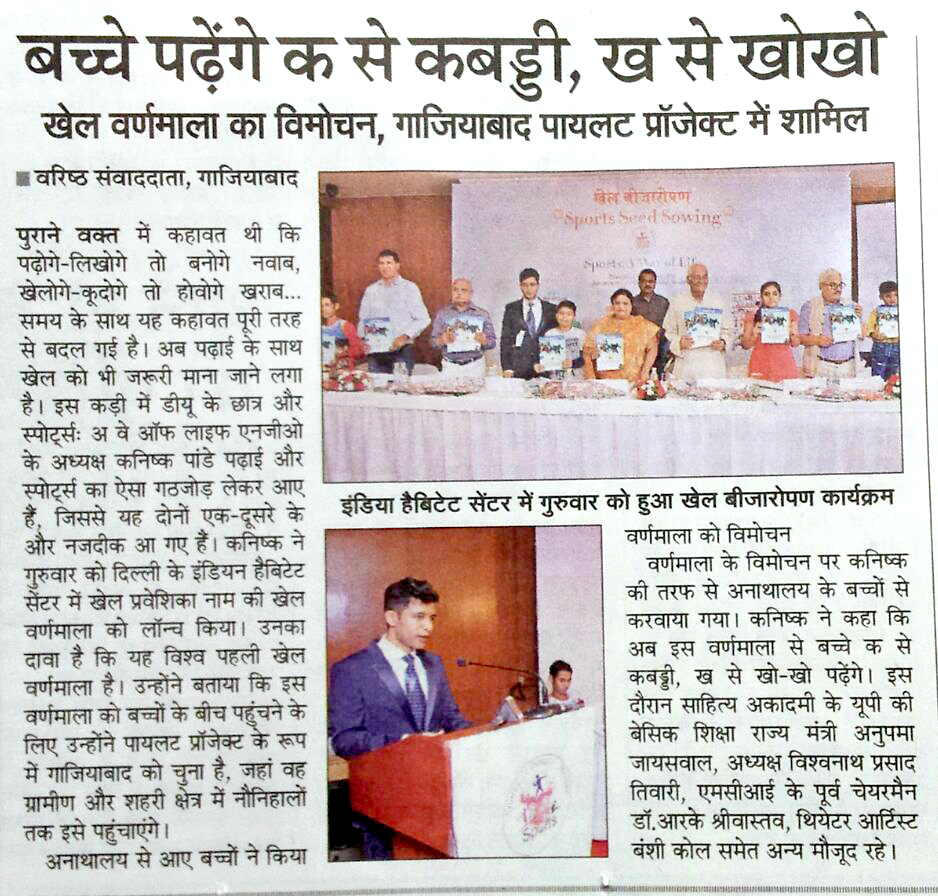